To share your memory on the wall of Milly Wheaton, sign in using one of the following options:

To send flowers to the family or plant a tree in memory of Milly Wheaton, please visit our Heartfelt Sympathies Store.

We encourage you to share your most beloved memories of Milly here, so that the family and other loved ones can always see it. You can upload cherished photographs, or share your favorite stories, and can even comment on those shared by others.

Posted Dec 22, 2020 at 09:34pm
September 26th, 1926 was the day Milly was born. And as many of you have heard, more than once, she came into this world at 1lb 12oz, and the doctor said, put that aside now and it won’t be long for that one now. And here we are, 94 years later saying our goodbyes. Bet ya he didn’t think she’d live that long now did he? She was born a twin to her brother Frank, god rest his soul. She was the most unlikely of the Vincent clan to survive, yet she outlived all her brothers and sisters. In fact, she almost beat her mother Elsie’s record, who lived to be 95 years old.

Now that may be an indication of the kind of woman she was going to be. She was a fighter from day 1, and a feisty little thing at times. She was strong minded, things always had to be done her way in recent years. Right up until her final moments, she had to do it her way, on her own time and her own terms. She could be stubborn as an ox, a character trait that I’ve learned has been passed on to
ALL of her children in some form or another, and maybe even a few of her grandchildren (such as myself) too. She was raised to be a tough woman, someone who didn’t show many emotions. Over the years with Nan, I wouldn’t be able to say she was the most affectionate woman I’d ever met, but when she gave you a kiss goodbye, one kiss was never enough. She had to give you 4 or 5 all in a row right fast that left a slobbery mark on your cheek. And I’d leave the house wiping it off. But I wouldn’t mind having just one more of those kisses now.

Now my memories of her and Pop together are short, as I was just a little girl when Pop passed away. But what I do remember is she was always by his side. Whatever he wanted to do, well that’s what they did. My Dad always talks about the times out in boat, where Pop was at the motor steering the way, calling out to make sure Nan was still okay. And she’d be back there holding on to the taut, drenched in salt water, squinting her eyes to see through the wind and waves, coming across the bay. I’m also told she never tarried when it came to getting things done. If Pop came in and said he was going to Gander, well Nan would all but bounce off the walls to get out the door in 10 minutes flat. Causing quite the tizzy and leaving a tornado in her footsteps. I’ll always remember the story of the time Nan took Pop’s truck for a drive down the lane before she had her license, trying to learn how to drive. She scraped by the side of the fence in the truck, and as Pop would put it “she painted the fence”. Needless to say, she never sat behind the wheel again.

I have fond memories of going to the junction to visit Nan and Pop at the camper. Going to the camper and she loading us up on a feed of sour cream and onion chips with a drop of orange crush. They spent many days at the camper with their friends Ray and Shirley Pelley and Roy and Joyce Boyd. There were countless nights spent playing cards and having laughs there. They’d roar in laughter and Nan would be there telling them all to
“Shush” because she always said a night of heavy laughter meant something bad would happen.

Now personally, I’d love going to Nans for her cooking! Her turkey neck soup was made every Saturday and was always enough to feed all the mouths that stopped by, whether that was 1 or 10. I’ll never find another bowl of soup like hers. Another favourite of mine was her gourmet Kraft Dinner, which was always put in a pan and baked before being served with a cold glass of tang and Kool aid. A can of Klik and salads were another specialty, one that I’m sure my brother thoroughly enjoyed. We’d all sit up for a cup of tea and apparently Nan and myself were the only ones who always went for the ice cube to cool down the tea before drinking it. Nonetheless, she would never see any of us go hungry.

These terrible times did not fair you very well Nan, and I am so sorry for that. We tried our best to follow the regulations and keep a distance to protect you from COVID, although you did not always understand. Actually, the last conversation I had with her was through a window. She came over, waving us in. I said “No Nan we’re not allowed in because of this flu”. And although her mind would slip at times, after a while she asked, “So how are we doing with this flu anyways?”. I said “Well the states aren’t doing too good” and she came back with “Well I don’t care about the states, I wants to know how we’re doing here!”

Milly was first a daughter and a sister, later she become a mother to 6 children, a grandmother to 11 - actually 12 grandchildren, because Jake was just as much a grandchild to her as the rest of us were, and she was a great grandmother to 21 great grandchildren. In recent years, as her independence began to falter, and her memory wasn’t quite as sharp. She could still carry on conversations and argue with anyone about different names and dates of different events... and she was almost always right every time. In the end, Nan felt she had lived her life to its fullest extent, and when illness fell upon her this time, she decided she had had enough. She was ready, and said it was time for her to go back home and lay down next to Cec. I’ll always cherish the memories I have, and I’ll always be thankful that I was able to be there with Nan, holding her hand and comforting her as she passed on from this earth. There will be no more suffering now Nan, you are at peace and safe where you are, and we’ll see you on the other side.
Comment Share
Share via:
RA

Posted Dec 19, 2020 at 11:13am
My oh my, the smells that would come from the last house up in Frederickton on Sundays, the cooked dinner and the puddings, as a young girl I would love to visit Aunt Milly and Uncle Cec for Sunday dinner sometimes.
After dinner me and Nelson would be off to do something fun, usually involved throwing a few rocks in the water from the shore..

To all my cousins Wayne, Kay,, Clyde, Clayton , Nelson and Barb, (you were called after my mom and I can hear ur dad saying , “ we called her after the right one , no mistake) I like to think that they are tormenting each other up there somewhere now , please know my heart is with you all as you say your final goodbyes to you mom..

Rest In Peace dear Aunt Milly , you were loved by all who knew you and will be remembered forever..

Hugs to you all 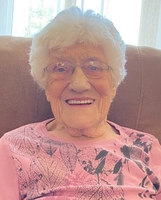