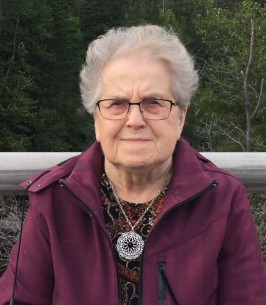 
It is with broken hearts, we announce the passing of Janet Goodyear, 93, of Carmanville, on June 20th, 2022, surrounded by her family.

This remarkable woman, born in Rattling Brook, Green Bay, was nurtured in a caring home. She often accompanied her siblings and dad as they completed their daily chores, inspiring her love of learning and dedication to achievement. This influenced her decision to pursue higher education and a career in teaching. Though small in stature, her success as a well-respected teacher was notable; her former students talked about her kindness, patience, and big heart. Her first teaching position was in Carmanville, where she met the love of her life, Jack. They married in 1951 and raised five children within a loving, close-knit family. Her combined passions for her children and her profession led her to return to teaching when there was a need in the community. A faithful member of the United Church, she was a strong lifetime supporter in many capacities, particularly with the UCW. Janet also enjoyed gardening, knitting, and word games (she embraced iPad technology to play Scrabble online in her nineties).

Visitation will be held at Stacey’s Funeral Home in Gander, Tuesday, 7:00 – 9:00 pm, Stacey’s Funeral Home in Carmanville, Wednesday, 2:00 – 4:00 pm and 7:00 – 9:00 pm. Funeral to be held Thursday at 2:00 pm at Emmanuel United Church in Carmanville with internment to follow at the Emmanuel United Church Cemetery in Carmanville South. In lieu of flowers, the family asks for donations to be made in Janet’s name to the Make-a-Wish Foundation or a charity of the donor’s choice. Although masks are not mandatory, they are strongly encouraged.

All rights reserved. This obituary is also archived at obittree.com